‘I WANT WENGER TO BE MUCH CLOSER TO ME’

MIKEL ARTETA has held face-to-face talks with Arsene Wenger about returning to Arsenal. The Spaniard (below) today refused to reveal the precise role Wenger would have, but hinted the Frenchman would act as a sounding board at the club. Wenger, who left Arsenal in 2018 after 22 years manager, now works as FIFA’s chief of global football development and Arteta has said the 72-year-old can dictate the timing of his return to the club. The pair spoke at the premiere of Wenger’s new film, Arsene Wenger: Invincible, which was at a Finsbury Park cinema this month, and Arteta is hopeful of a positive outcome. “I cannot tell you now, but what I can say is I would like him to be much closer personally to me,” said Arteta, when asked about what Wenger’s role would look like. “Because I think it would be a great help. Things take time, and I think he has to dictate those timings. “What I can say is from my side, and I can talk, I think, on behalf of everybody, is that we would be delighted to have him much closer.” In his film, Wenger opened up on his painful exit from Arsenal and why he has still not returned to Emirates Stadium to watch a match. Wenger has kept his distance but Arteta, who played under him for the club, has explained he would like him to have an influence now as he continues to rebuild Arsenal. “It was incredibly pleasant to see him and chat to him — and hopefully we can bring him close,” said Arteta. “Because I think he will have a great time just seeing the environment that he can create around him [and] around this place. Because of the respect and admiration that everybody at the club has for what he’s done — and as well for what he represents as a person in this club. “There has been communication, and I saw him and talked to him when we went to see the film.” Arsenal are back in action this weekend against Newcastle and, other than Granit Xhaka (knee) and Sead Kolasinac (ankle), they have a fully fit squad to choose from. Xhaka is recovering well from the injury he picked up in September and Arteta hopes he could be back before the end of the year, which would be ahead of schedule. “Hopefully, he will 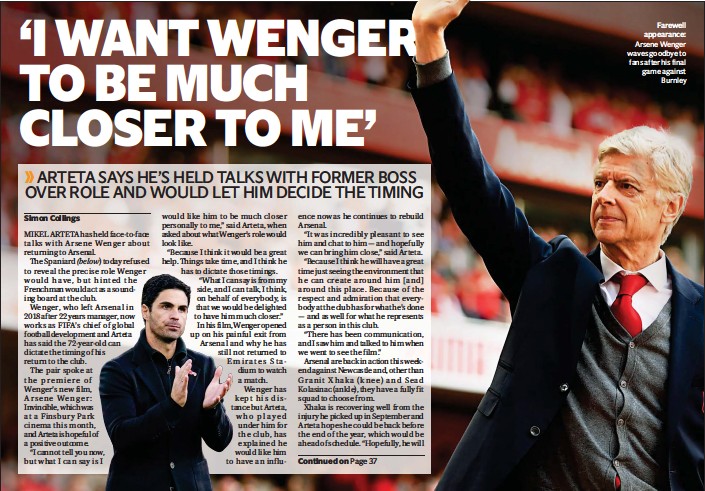