is uncompromisable somehow,” he says. Gillian Anderson and Danielle Steel are certainly that. Artists Gilbert & George, whom he worked with in 2018 on a collaboration project, similarly. Ditto Schitt’s Creek’s Levy, who Anderson describes as “probably one of the most magical people I’ve ever met. He has this way of being able to be excited about you being excited which is such an incredible gift”. For Levy’s Met outfit, Anderson, who has a longstanding interest in the activist and queer artist David Wojnarowicz, adapted his works, including F*ck You F***ot F*cker, 1984, as part of the look. Levy said the pair wanted to celebrate “queer love and queer visibility” while reminding people that “there’s a lot more that needs to be done”. Born in Northern Ireland in 1984, Anderson initially pursued a career in acting, which evolved into an interest in costume, eventually studying menswear at London College of Fashion and graduating in 2005. He went on to work at Prada as a visual merchandiser, rose quickly as a star of London Fashion and by 2012, was producing collections for Topshop and Versace’s Versus. I recall visiting him in the early years in Dalston, where he sat surrounded by Italian Vogues, chain-smoking and talking about how quickly he’d tire of his own designs. Backstage at his shows, his mind will practically dance in front of you as he recounts inspirations. One of his defining early collections, men’s AW13, featured men in bandeau tops, ruffles and shift dresses. Anderson says in this early work he was not purposefully looking “into gender narratives. But I was thinking why are we forcing people into choosing what they have to wear? We have to liberate the idea of the wardrobe!” He was taken with the notion — ahead of the curve — of a shared wardrobe. He recently wrote: “Over the last decade, the rules of gender have been broken down. Younger people no longer want division or definitive boundaries.” Sidenote: the designer himself appeared in a striped dress of his own design for Hero magazine. Anderson’s choice of Soho as the location for his JWA flagship store was a no-brainer. Aside from reminding him of his university years living on Tottenham Court Road, he loves the area’s energy: “There is something about being around the energy of Soho that encapsulates what JW Anderson is about. This idea of looking at gender, how we see ourselves, youth culture, complexities.” Returning to the runway this autumn to show his SS22 women’s Loewe collection in Paris, the designer had mixed feelings. “It was exciting. It was confusing to be honest. It’s quite difficult to go from not being around a lot of people to being around a lot of people but I felt like it needed to be done.” Models rose out from the floor into a purpose-built white space wearing a collection featuring column gowns jutting out at the hip, striking metallic breast plates and shoes featuring heels resembling broken egg yolk or birthday cake candles. “I was trying to look to clothing to express things you can’t express,” Anderson said. “I wanted the shapes to be something incomprehensible — there are moments when you don’t know what you’re looking at or how something was constructed. It was very much about from the ground up. Like birthing a new idea.” As part of Anderson’s approach to sustainability, he launched Eye/Loewe/ Nature, a range centred around upcycling. But he knows that there is a lot more to do and that it is an ongoing area that fashion needs to unite over. “It is all of our roles to deal with it,” he says. “The industry has to work together. It needs leadership. Government support. It is going to need a lot of technology [for fashion] in the next few years to hit targets, but it is possible. The great thing about fashion is it will go to where the consumer is, and the audience want things that are sustainable.” In a similar vein, his partnership with Uniqlo is about delivering to a wider audience: “I don’t want fashion to be alienating and only seen by a certain demographic. It’s important to find new ways to talk to customers and it doesn’t always have to be high fashion.” During his career, the designer has won various British Fashion Awards, including a double win in 2015 for men’s and women’s designer of the year. On this year’s nomination he says he is honoured to be considered, though quips: “I do think anyone who has been able to produce anything creatively should win an award right now! It’s a moment to really get behind each other.” For Anderson though, ultimately, he wants to do his work. “You have to remember there will always be another collection. The minute I don’t have curiosity anymore, I won’t do this job.” • The Fashion Awards: Presented by TikTok are on Monday, keep up to date at standard.co.uk/insider 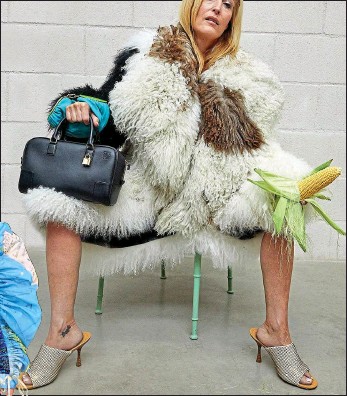