Taking a baby into the Commons wins my vote

FOR a Westminster Hall debate called “promotion and regulation of financial products on Black Friday”, it sure garnered a lot of attention. Yet what seemed to matter most was what, or rather who, the Labour MP Stella Creasy was holding during the debate — her 13-week-old son Pip, right. Quick, everyone assume the culture war position! First, the basics. Members of Parliament are officially office holders rather than employees. Consequently, they do not qualify for statutory employment rights including maternity leave. In 2019, the Commons introduced a pilot scheme of proxy voting for MPs on maternity, paternity or adoption leave. This was made permanent last September. But it comes with strings attached. Should an MP on parental leave wish to speak in the chamber, the rules dictate that they must relinquish their proxy vote. In Creasy’s words, this makes Parliament “one of the few workplaces in the country where, when a new mother comes in for a ‘keep in touch’ day, she is rebuked rather than supported.” Creasy, who has had the gumption to have more than one baby while an MP, is no stranger to taking the fight to the parliamentary authorities. She has battled for — and won — more money for MPs on maternity leave to fund casework and became the first to appoint a locum MP to undertake constituency duties. Commons Speaker Lindsay Hoyle yesterday invited a committee of MPs to review the rules surrounding infants in the chamber. There are few issues the Commons does not think can be solved — or at least buried — by a committee of MPs. The strange thing is that a baby makes perfect sense in Westminster. The Parliamentary Estate is more like a village than a workplace. Given its vast size, you could live there quite easily, like Tom Hanks in The Terminal. The Members’ Handbook notes that the Estate boasts roughly a dozen places to eat (the jerk chicken is legendary). There are showers and changing rooms — opposite the hairdressers, naturally. A gym, five souvenir shops, a chapel, medical facilities and until 2015, a rifle range. You’re not technically supposed to sleep there, but you wouldn’t be the first. Of course babies belong in Westminster. As the saying goes, it takes a village to raise a child. 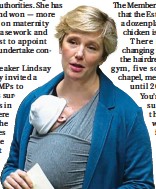