THE control room at Battersea Power Station where technicians once controlled the flow of electricity to thousands of homes across London is to be turned into a bar that is due to open next summer. The restoration of the brutalist, faience ceramic-clad Control Room B was marked this week by a visit from singer Sting who owns an apartment at the £9 billion power station development. The control room, which retains its arc of original stainless steel control panels, was built in the Forties and Fifties as part of the second phase of the construction of the Grade II* listed former generator. It has appeared in scenes from the Beatles film Help and on the cover of the rock band Hawkwind’s album Quark, Strangeness And Charm. It is one of two control rooms at the coal-fired power station on the south bank of the Thames. Control Room A was built in the 1930s in an Art Deco style. Station A closed in 1975, with B closing in 1983. 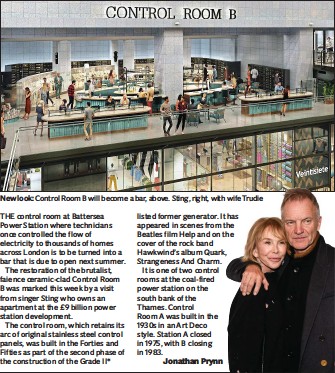